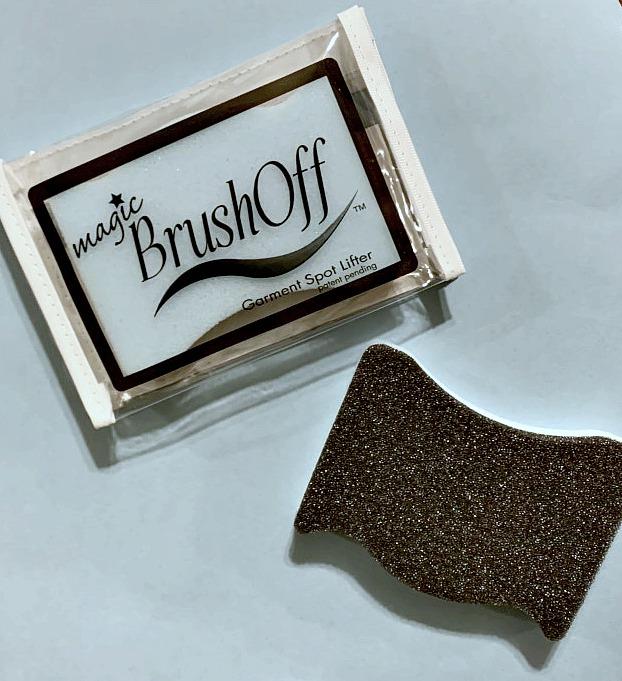 Have you ever been in a situation where you're in a rush to get ready and then at the last minute you notice a spot on your planned outfit that you were going to wear? What do you do? Normally I'd say, “Find another outfit because there's no time to fix it or wash it.”  Well, now there's a different solution! And, it's a solution I think many of us would prefer. It's called Magic BrushOff™.

How This Tool Came About

One day the founder of Magic BrushOff™, Kelly Kaufman, had found herself in a rush to get ready but then found deodorant and makeup marks on her clothing. She had remembered a suggestion from a friend and she tried it using a fabric similar to that in the Magic BrushOff™ and it worked—it successfully removed the markings. After that, she did her research and created a new, innovative product called the Magic BrushOff™.

What Exactly Is the Magic BrushOff?

Now, you're probably asking, “What exactly is this magic tool?”  It's a tool with a dark-colored side that has a slightly abrasive feel to it and you use this side to loosen the stain matter. The other side is a slightly softer sponge-type material that is for wiping away the matter that comprises the spot/mark.
It has been utilized to remove spots on material made from makeup, deodorant, food and more. It can also help remove lint and pet hair. And, you can utilize it on various fabrics, including cotton, rayon, polyester, and many others. (It's not recommended for use on silk or suede.) Please note, I do think this tool works great on spots that aren't set in (for example, I wouldn't use it on oil stains).
The BrushOff has a static cling that helps it remove spots. And, it's reusable, which is what I love. It's also light (barely weighs anything) and it comes in a nice carrying case so you can keep it with you in your purse or when you travel.
We tested it on a chocolate stain on our carpet and it worked within a few scrubs. We also utilized it on my family's black-colored futon. This futon notoriously attracts my orange-and-white cat's hair. The Magic BrushOff did successfully remove the hair with some scrubbing and wiping and left a nice black futon minus the pet hair.


For those of us with pets, I think we can all agree it's not fun trying to remove pet hair from furniture, especially when the pet hair somehow magically weaves itself into the fibers of the furniture, thereby making it seemingly impossible to remove. So, to find a tool that can remove the pet hair is a nice thing!

Give The Gift of a Spot Lifter!

The Magic BrushOff™ would make a great stocking stuffer or gift for many! It's useful and affordable. It's also nice to have on hand when you need help with those little spots on our clothing caused by food, deodorant, and other such substances.  You can purchase the Magic BrushOff™ on the product's website. It currently retails for $13.50 (price subject to change), which includes shipping.  Try it out (especially if you have pets)!

The Magic BrushOff makes life more “spot-less,” which is much appreciated! 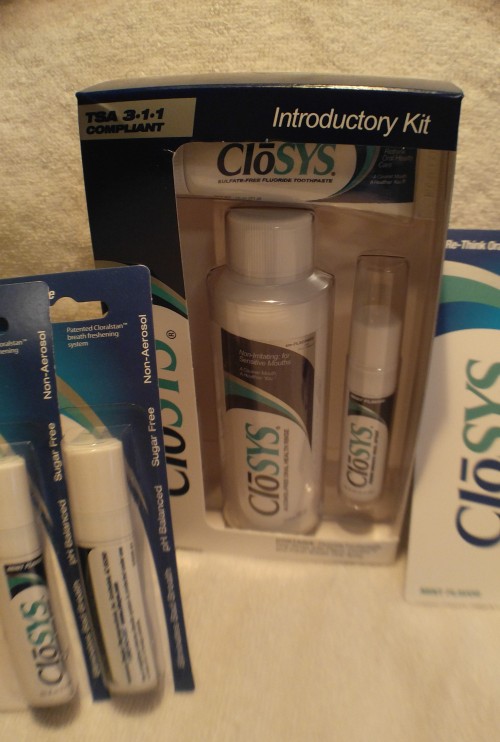 CloSYSis not the normal oral care that you are used too. Some of those other toothpastes and mouth rinses have ingredients that can do your mouth more harm than good. They they think you will keep using them just to have fresh breath. CloSYS contains no alcohol or sulfates, PH balanced to make an effective difference…

Just in time for Easter, our new crazy cup flavor brings together chocolate and almonds.  Every month Crazy Cups, bring us the best flavors in a KCup. that makes your taste buds sing.  This month the flavor is  Crazy Cups Chocolate Covered Almonds, two of my favorite things.   How can you describe Crazy Cups,…

Dots on Tots is a company striving to provide high quality organic cotton hats for babies and toddlers.  Skin sensitivities are becoming more and more common among babies.  By using organic materials, babies’ skin can be protected and parents can have peace of mind.  Dots on Tots features innovative hat designs for girls and…

Water is boring to me. I really don’t drink much water because it really has no taste to me. So when I had heard about the zing anything I  wanted to try it. I like to add lemon into my water and at least it’s not boring and has some taste to it….

Recently had the pleasure of reviewing the Starlooks Starbox. Starbox is the monthly subscription box by Starlooks, for just $15 per month you get 3-4 full size products. Included inside the Starbox are different cosmetic products {eye-shadows, lipstick, mascara, makeup tools, ect.}. The January box, which is my first Starlooks box, was packaged up nice… 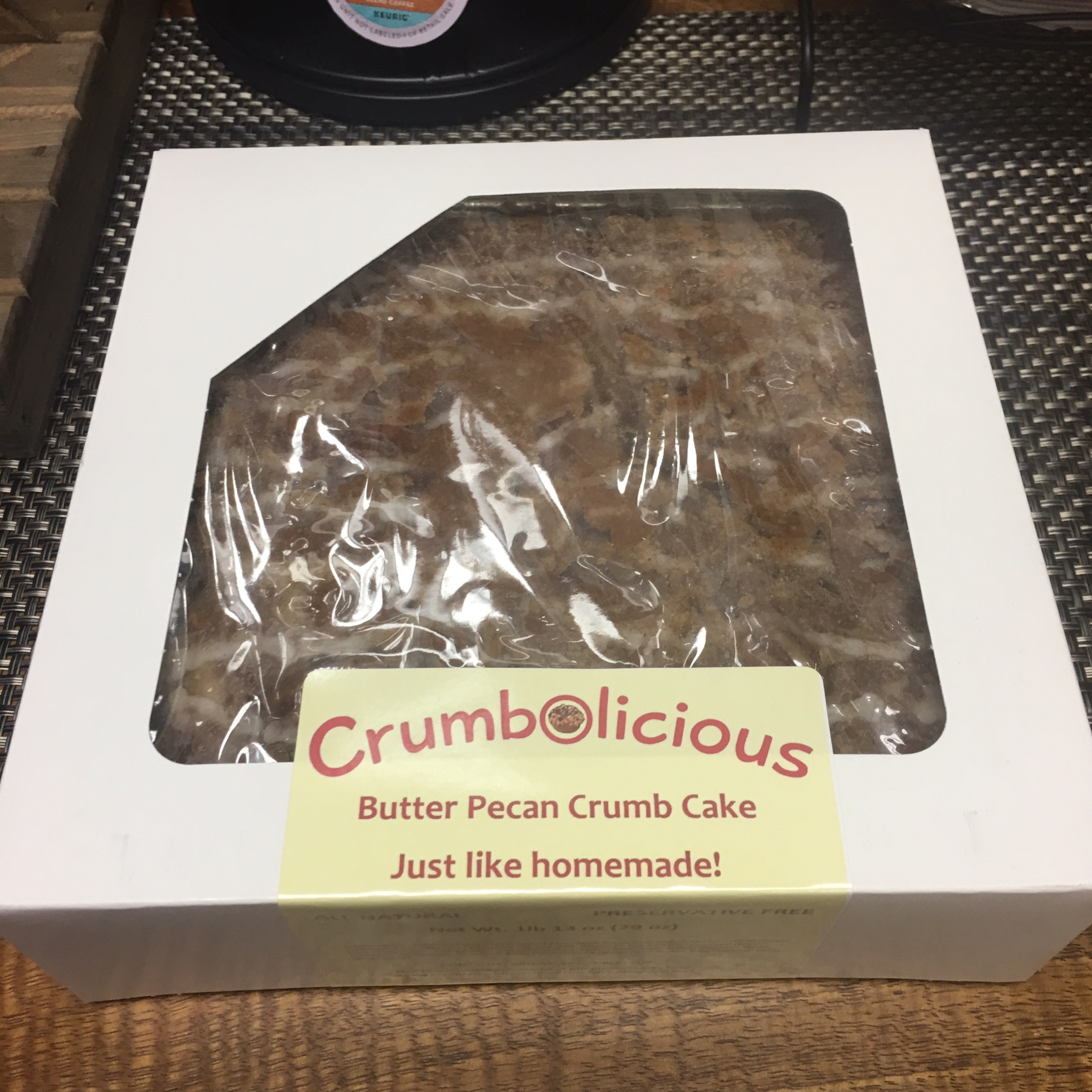 Spring is nearly here! When the weather gets warmer people start to come out of their homes and socialize.  I haven’t seen my neighbors in months! Shortly after the weather started to turn back in November and the days started getting shorter so did the interaction in our neighborhood. We MidWesteners like to hunker down…