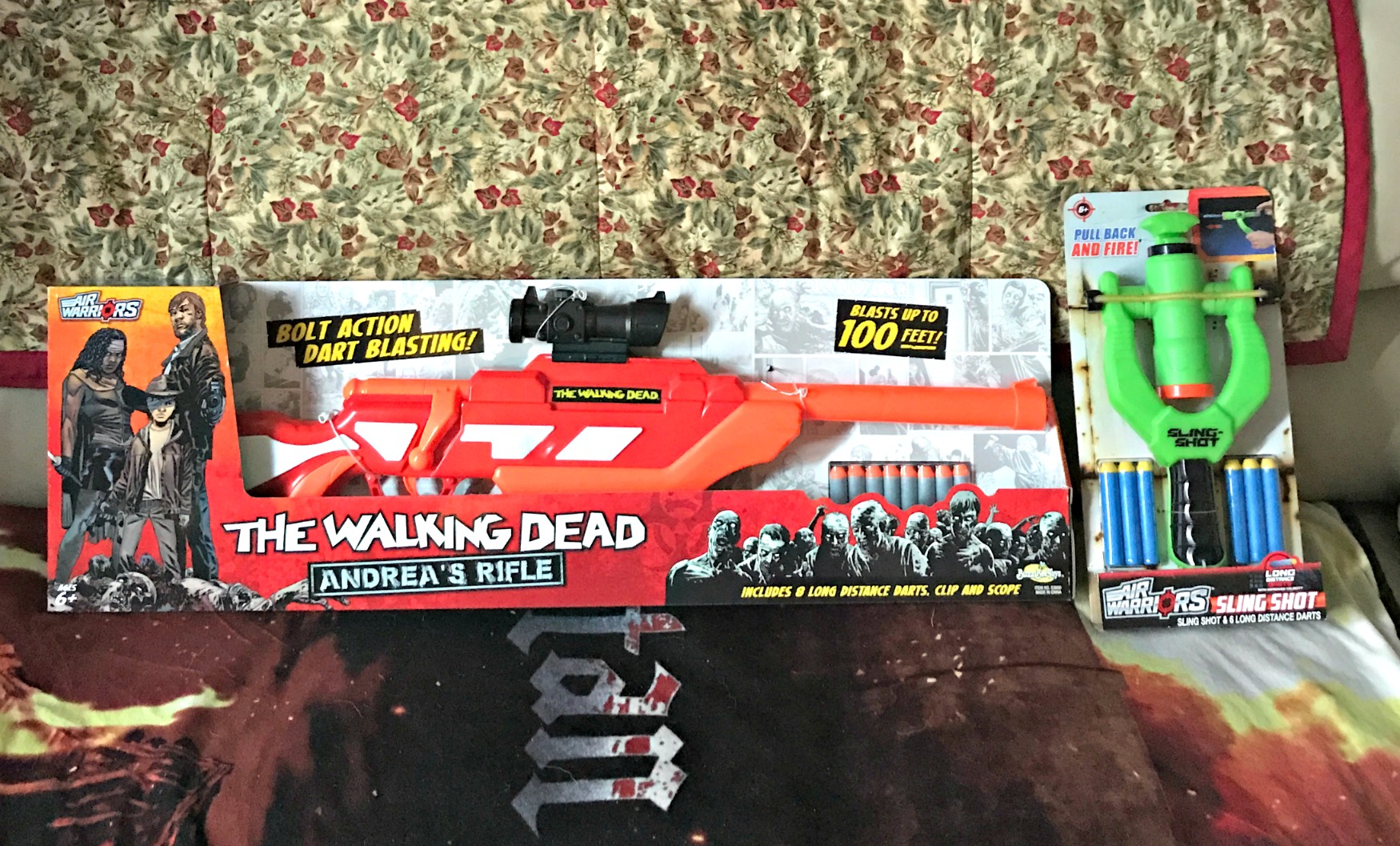 The Walking Dead Soft-Dart Guns Are Cool Replicas! If You Like The Show, You'll Love The Guns!  They're Fun For All!

I have to be honest with you, I'm not really a big fan of The Walking Dead show.  However, I have definitely watched it and know about the cool guns the characters carry.  I especially like the one that Andrea carries, so you can imagine my excitement when Buzz Bee Toys Inc. sent me that exact gun!  I used to buy these types of soft-dart guns for my son when he was little, but I never really used them myself.  Let me tell you, I feel like I missed out on something great.  Oh, not only did they send me The Walking Dead Andrea's Rifle, but they also sent the Air Warriors Sling Shot (not of The Walking Dead).  These darn toys are so much fun!  Yes, I'm a grown adult and I'm loving shooting at different targets in my house. 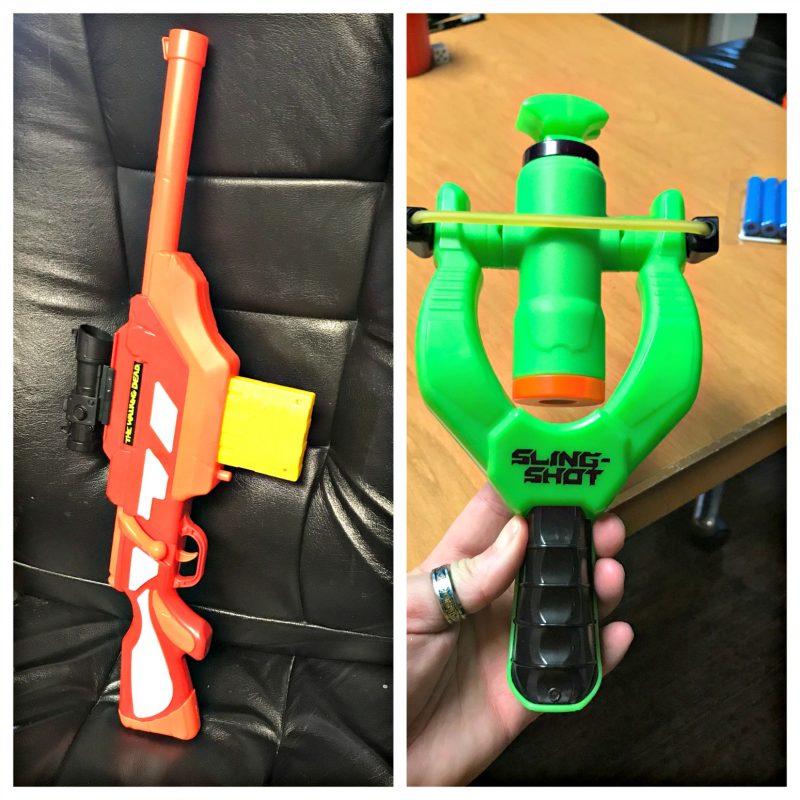 This amazing toy replica has a scope that's detachable and a secret storage compartment for extra ammunition!  You never know when a mean old zombie is going to walk upon you.  The dart clip holds 8 soft darts (all included) and it's so easy to load, even a kid can figure it out.  It shoots up to 100 feet and I must tell you that if you happen to shoot a human being (not recommended) it does give a tiny sting, but doesn't leave any mark.  I had to try it out just to let you know!  It is recommended for ages 6 years and up.  I'm sure they'd love it if Mom or Dad set up some targets around the house or outside because you never know when a zombie is going to pop up.  You have to keep your shooting skills on “target”.  Shoots all-natural, biodegradable gellets with Gel Blaster, safe for kids and safe for the environment. 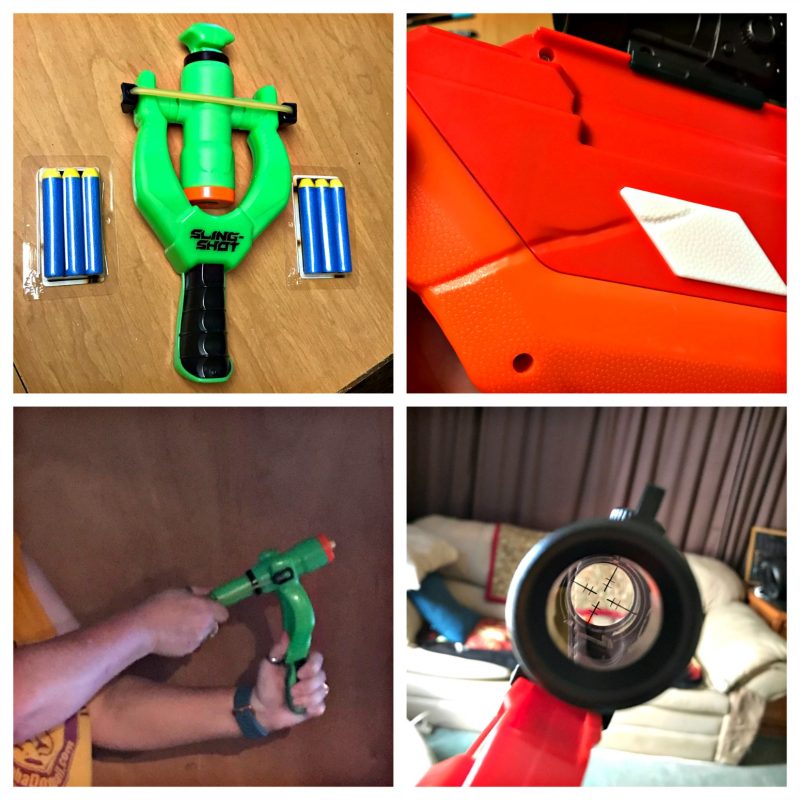 This little piece of craftsmanship is so much fun to use.  The thing I love about both of these is that they're both so easy to handle and shoot.  Little hands won't have a problem at all.  The slingshot doesn't even have to be pulled back very far to shoot.  It's also easy to aim because you can move the aimer to different poses before pulling and shooting.  It comes with the slingshot (obviously) and 6 long-distance soft darts.  Again, this particular shooter is appropriate for ages 6 and up!  Set up some targets and let your kids go crazy.  No longer will they going to be whining that they're bored. 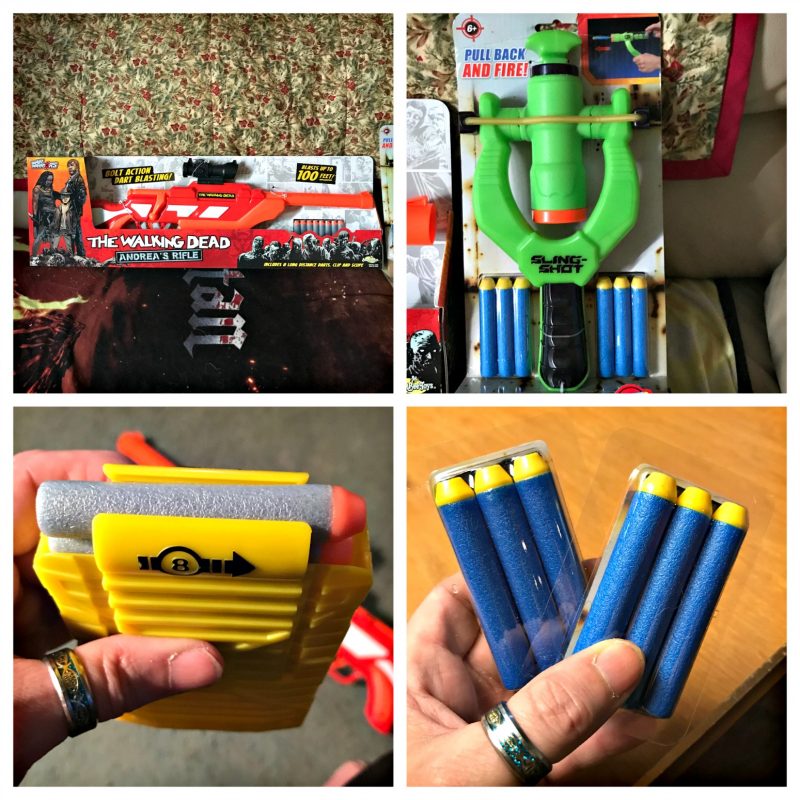 Buzz Bee Toys can be found on Amazon too! 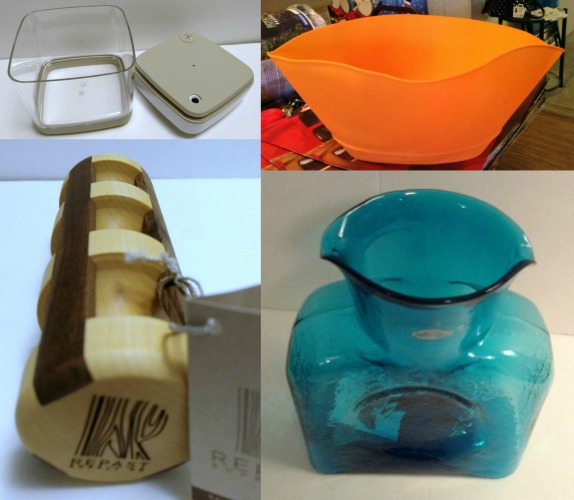 Silicone Splatter Guard “Keep your simmer and sizzle contained with this silicone splatter guard. Frywall lets you sauté, fry, and marinate at high temperatures without spattering your counters and walls. Its soft silicone fits snugly in 10” pots and pans, and is angled to let you access the food as you cook. Stick it in the dishwasher to… 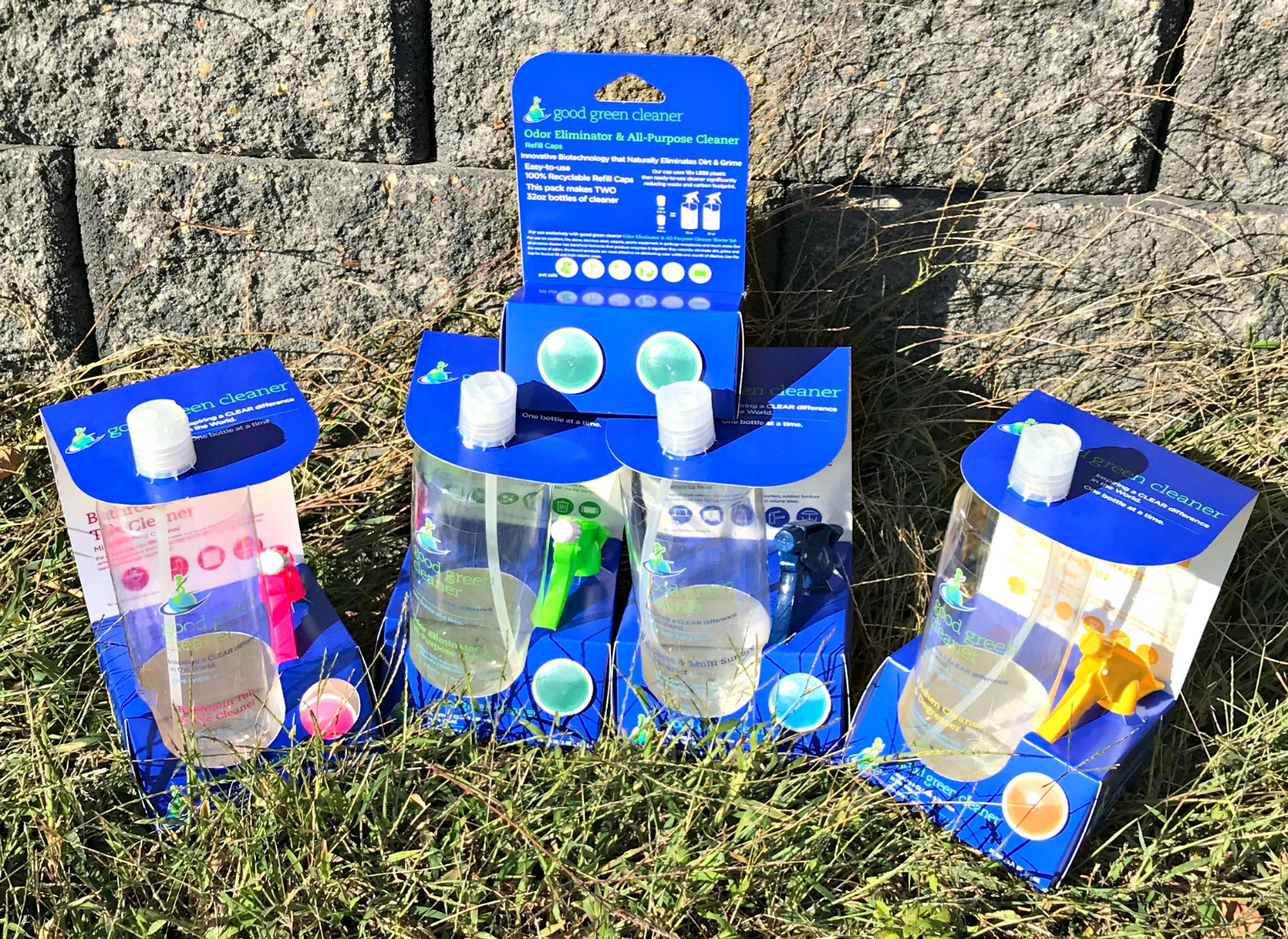 Clean Doesn’t Have To Equal Chemicals – This Company Has Created A Better Way To Clean When my kids were little, for some reason, I didn’t think my house was clean unless it smelled like bleach or some other harsh chemical.  I honestly thought that was the only way to protect my family from germs. …

When I was asked to do a review for Corset Chicks I was sort of afraid, being a plus size girl we all know how hard it is to find that perfect thing and we know how hard that is to find it to fit us the right way. So I went and check out…

Can you believe Christmas is already here when you pick out gifts what thoughts do you put into it? For me, I want to make sure they are going to love the gift, and its something they are needing or will use.  That is where Lovesac comes in, they have some of the best… 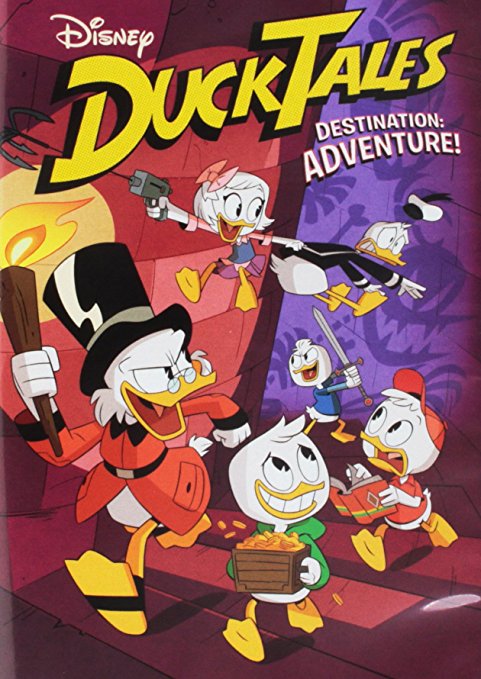 When it comes to cartoons, we love watching them with the kids, my nephew loves Micky and Minnie and of course Donald and his nephews. Huey, Duey, and Louie come close to finding some information about their mother in “The Spear of Selene.” They also discover that Donald is friends with Storkules and that… 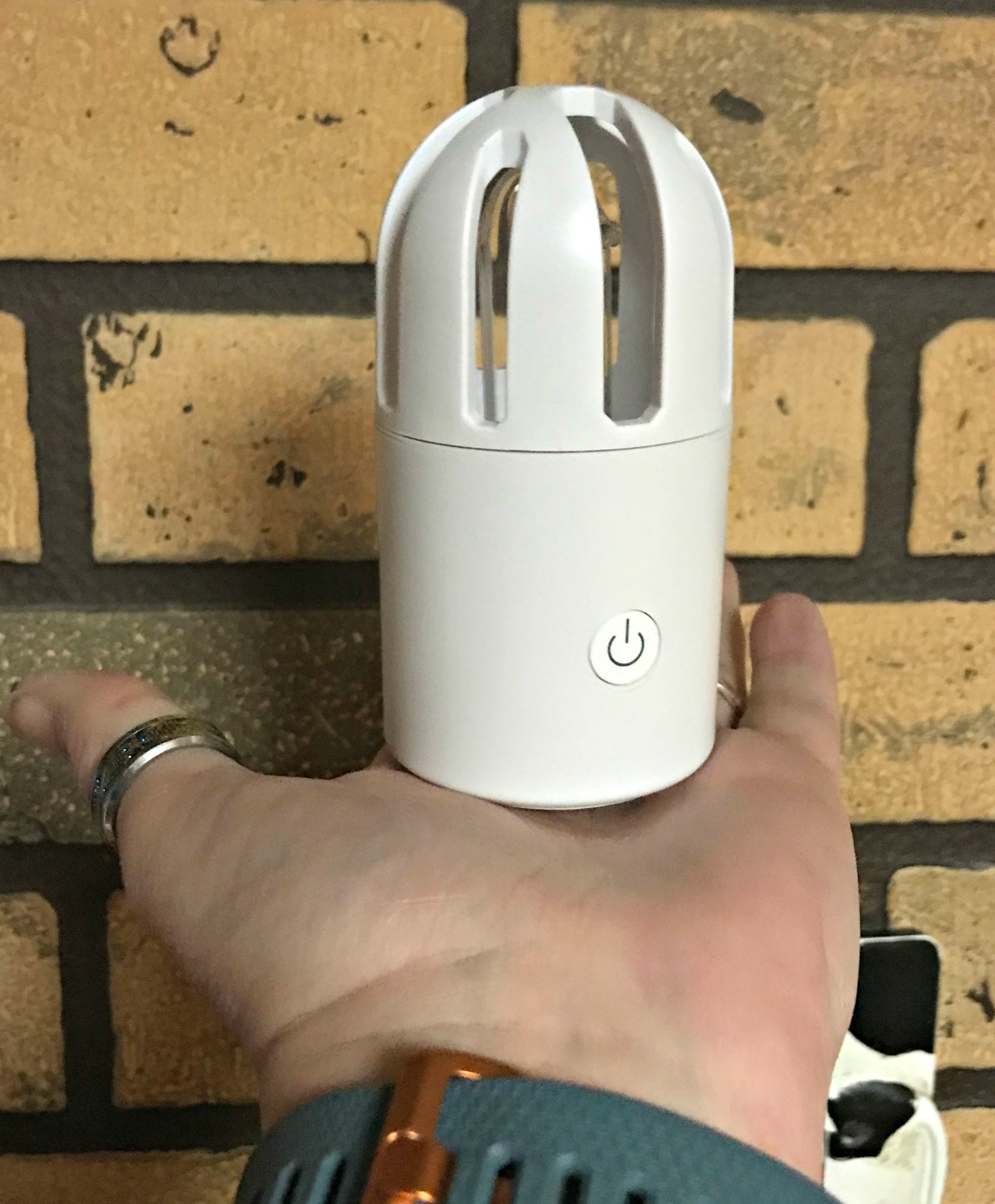 Sterilize Those Germs With This Portable Sterilizing Lamp – It Can Be Used In Your Car And Home! Germs can be dangerous, but add in this crazy pandemic and we all know what can happen.  We hear all of the numbers on the news so what can we do about it?  Well, as they say,…